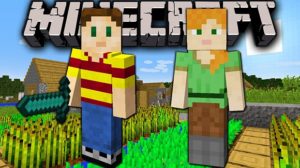 Oh no. Another Minecraft blog.

Well, kind of. But probably not what you are thinking.

Minecraft has become a wildly popular game amongst a wide age range of youth. My son, for example, an 9 year old, is already very interested in taking classes on coding and how to do the modifications in Minecraft. You can understand why young children tend to be so obsessed with the game when you consider that Minecraft is a living world, allowing children to have a sense of control over an environment when they are barely learning to control the real world around them.

You have probably read a dozen articles on what the educational benefits of Minecraft can be for students. As stated in the iD Tech article, How Minecraft Doesn’t Block Girls Out, “One of the best ways to introduce girls to STEM subjects is by providing a character they can identify with. … For most of Minecraft’s existence, this was arguably the one area in which it fell short.” With the main characters available being Steve and Alex, you can understand why boys tended to gravitate to it in the beginning. But with the advent of skins and other mods available, girls are now able to create characters of their own. Which is fabulous news! Now the game is becoming exactly what the designers intended in the first place – a gender neutral world.

So you may be aware of the educational elements of Minecraft. And you might have even thought about it from a social development aspect. For example, the Meridian Library hosts an event once a week for 8-13 year olds to come and play in a closed circuit network. That means that a group of up to 16 kids can play in a safe environment, controlled by the proctor, while also learning from the others in attendance. They also host a class on early introduction to modifications. The events are wildly popular.

Imagine setting up this type of club in your school! Allowing students to interact and learn from each other in a safe, friendly environment, using equipment that is most likely better than what they might have access to at home, AND is safer than if they are on the internet versions of the game. But does your staff have the ability to set up this network or utilize a current computer lab to facilitate group play?

If you would like to consider offering this type of learning play at your school or in your district and are unsure how to get it started, please call your West Valley Tech Services technician to see if we can help you get started today.

Do you have a topic you would like to see us cover? Email your ideas to office@wvtechservices.com